The flora of Périgord in South-West France is abundant and diverse. In this blog you can find, in pictures, brief encounters with several hundreds of wild flowers and plants as they grow here in French Perigord. Following the seasons other species are added. An index of scientific and English names you find below on the right.

Corine Oosterlee is a botanist and photographer and she offers guided Botanical Walks and other activities around plants and vegetation in nature in Perigord. Do you want to know more? On www.baladebotanique.fr you can find more information. For Corine's photography see www.corineoosterlee.com. Both websites also in English.

After a year and a half, here again plants portraits from Perigord in this blog.

Ferns are spore plants. In their life cycle very small plantlets called prothalli develop from spores. The prothallus does not look at all like a fern as we know it. On them structures, also very small, grow that produce eggs ans sperm and after fecundation the sporophyte, the 'real' fern, the plant we recognize easily as such, is born. If the fern is mature it begins to produce spores and the cycle can begin again.

Most ferns need humidity in the prothallic stage, if not there cannot be fecundation. No problem in mointainous areas with shadowy slopes and lots of water flowing over rocks, but here in Dordogne where water seeps away through porous limestone it can be more complicated.

So Perigord is not especially rich in ferns. But especially in wooded valleys there are beautiful spots full of ferns. Like here below, on an old path where the remains of the stone walls that bordered it once are still visible. 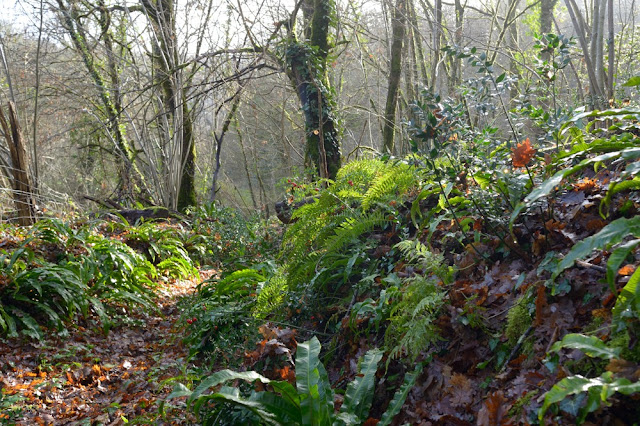 Here we see many 'tongues' of Hart's Tongue Fern (Asplenium scolopendrium), in the centre of the image a bunch of simple divided fronds of a Polypody (Polypodium sp.) and a bit more to the right smaller and thinner fronds of another fern.

Here is its portrait in spring when the new fronds emerge. Black Spleenwort (Asplenium adiantum-nigrum) has black stems and finely twice-divided fronds. 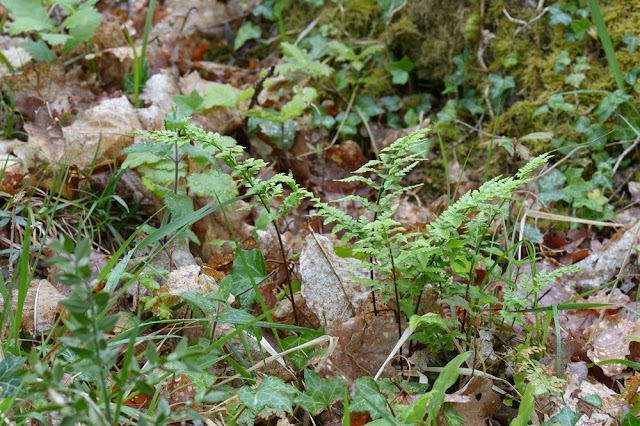 It grows in deciduous woods, especially Oaks and Hornbeams, but also in mixed forests with Sweet Chestnut, and sometimes it accepts places where there is sunshine during a part of the day.

It does not need much soil, a hole in a wall is enough! To grow, Black Spleenwort prefers places not completely horizontal, but generally it does not want complete verticality. 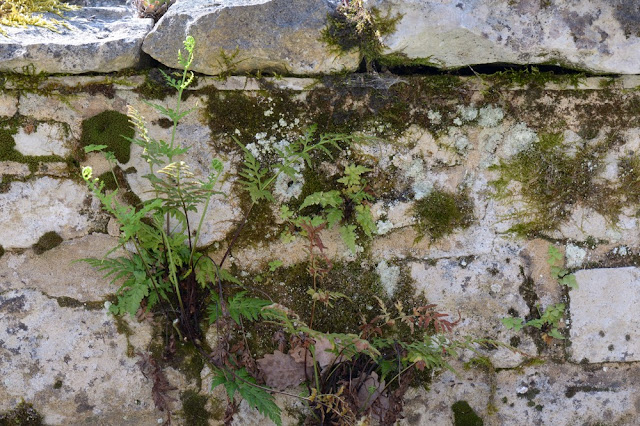 This elegant and subtle fern is never more than half a meter high. 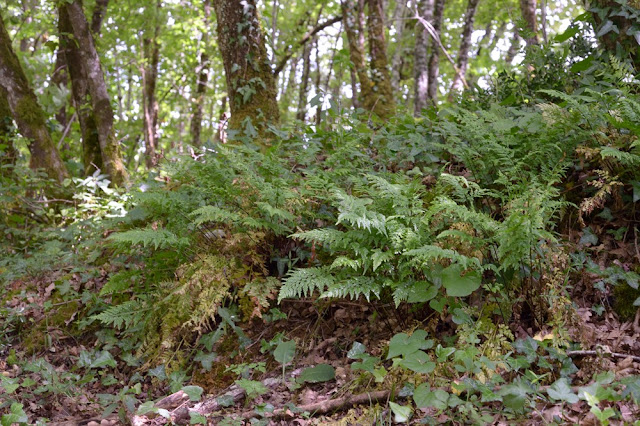 Besides a forest track under Holm Oaks Black Spleenwort has grown into quite a colony. In May some of last year's fronds are still here but they turn yellow and will soon be gone.

Many plants make rosettes at ground level in autumn. They take some risks, because the leaves should not freeze. Bulbous Buttercup (Ranunculus bulbosus) does not fear frost; a concentration of sugars in the sap protects them. 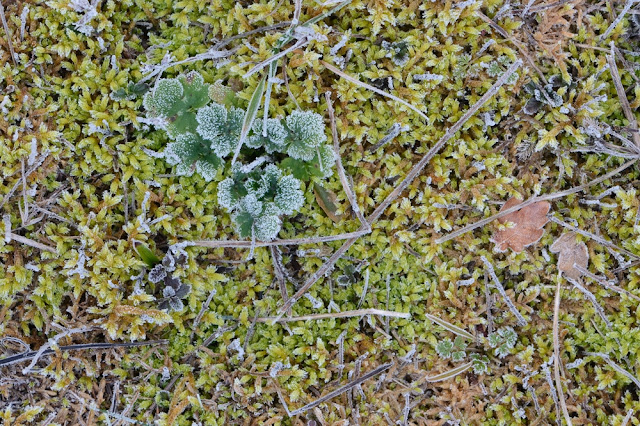 And if some leaves die and disappear, no problem, the plant will make new ones.

As its name says, Bulbous Buttercup makes a bulb, just where the rosette leaves are attached the roots thicken. If you dig a bit you'll find a kind of turnip about the size of a marble. 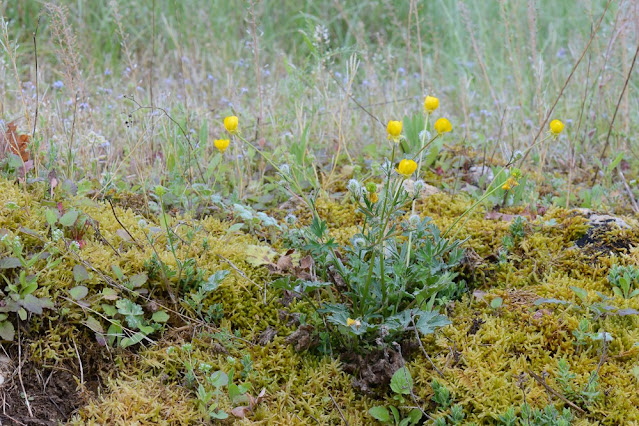 In spring the plant develops and now you see its flowers. They look just as the flowers of other Buttercups. But this one likes dry and poor soil, like here in a limestone meadow. 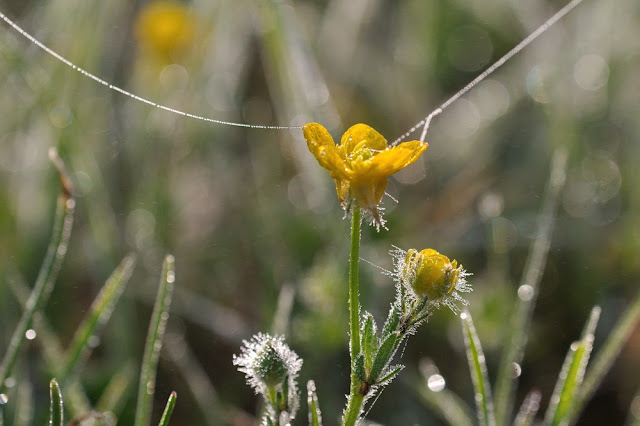 A bit of dew and you can see this plant is a bit shaggy, especially the sepals, yellow and folded back against the stem when in flower.  Like with many Buttercups, the leaves of the rosette and lower on the stem are different from those under the flowers. 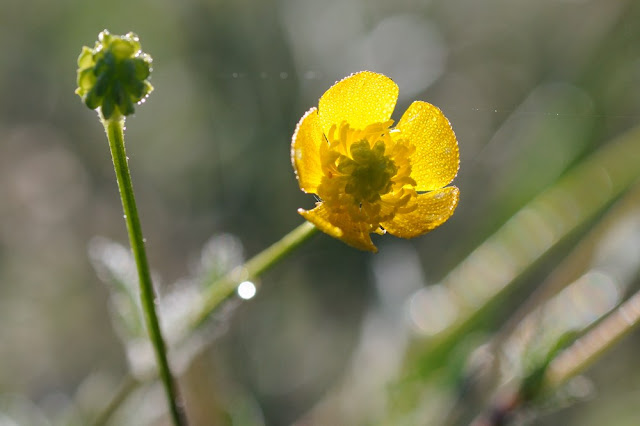 In the center of a ring of petals and a ring of stamina, both very yellow, you can see the fruits beginning to develop.

This big tree has green leaves even in winter. Sometimes it forms real forests, mainly on dry limestone hills, but not only there, in Perigord there are some exemples on sandy soil. It is Holm Oak (Quercus ilex). 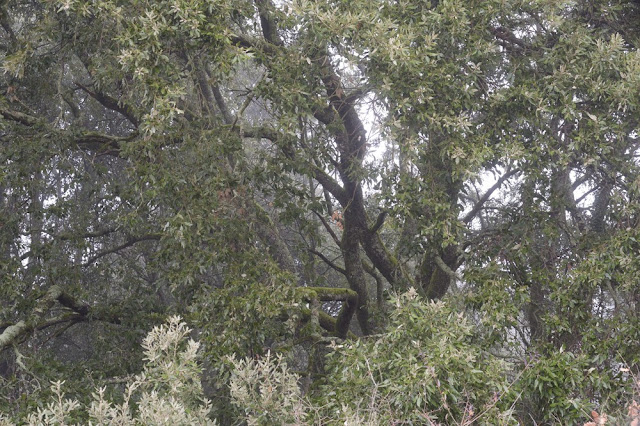 Yes, it is a real Oak, it makes acorns. 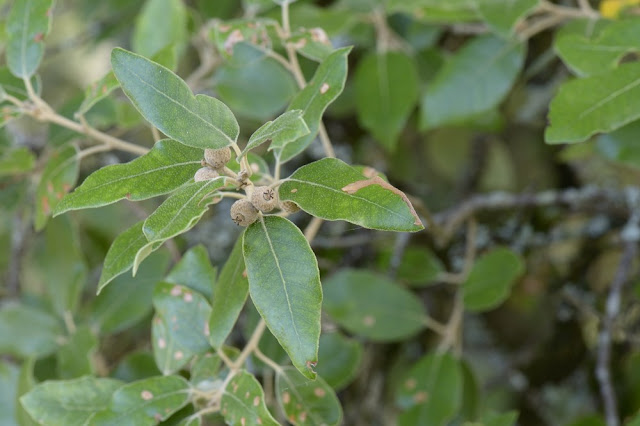 Here they are still small. You see mainly the cup from where an acorn tries to grow out. Remnants of the female flower are still visible like a tiny brown star. 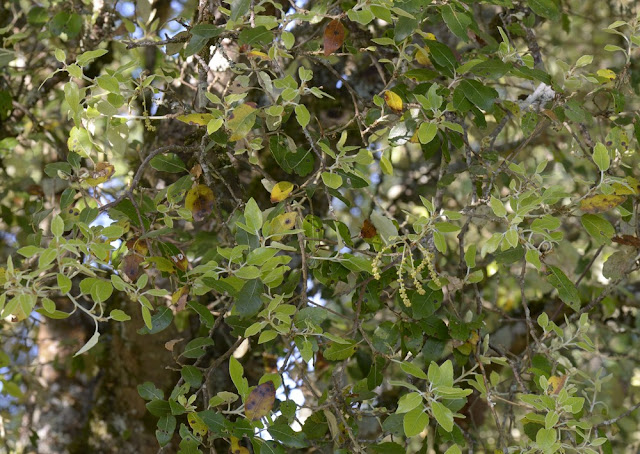 Holm Oak has Autumn and Spring at the same time. The leaves, that can stay on the branches for several years, loose their chlorophyl and then fall down in May. In the same period the tree makes new sprouts and flowers. Young leaves are tender green and they as well as the new branches are covered in a kind of whitish felt. 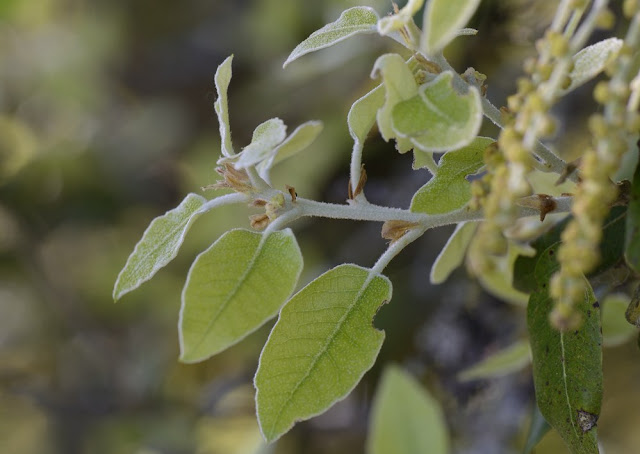 At the top of this stem, where the leaves are attached, you see some very small female flowers. The dry brown scales are remnants of the leaf buds. 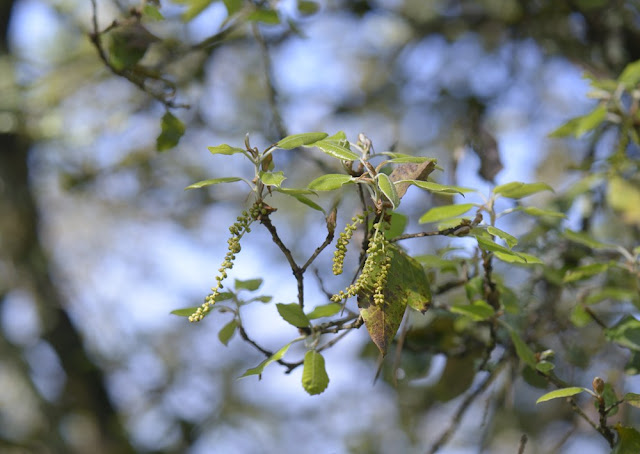 Male catkins are much larger. They grow on the same tree.

Holm Oak grows slower than other Oaks from Perigord, but it can stand hot and dry weather somewhat better. Climate changing, with hotter and dryer summers is no good news for Oaks, but this species could have a slight evolutionary advantage over other Oak species.

It is a wild - indigenous - tree, but in Dordogne there are many strains coming from elsewhere. Mycorrhized with truffle mycelium, Holm Oaks are planted to harvest this tasty and expensive mushroom. 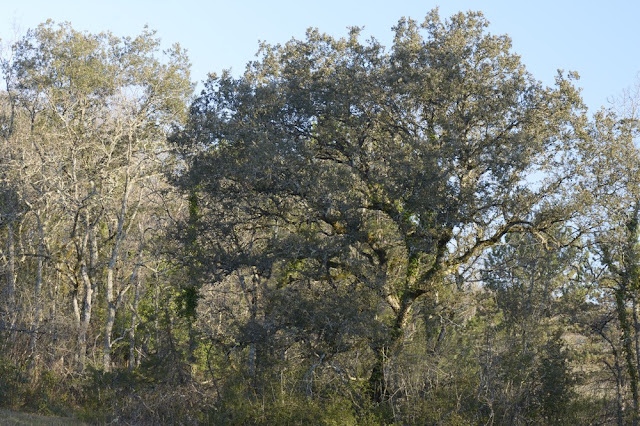 The blue fruits, sloes, are edible but only after the first frost, otjerwise they are to acid and astringent. They grow on a small very thorny bush, Blackthorn (Prunus spinosa). 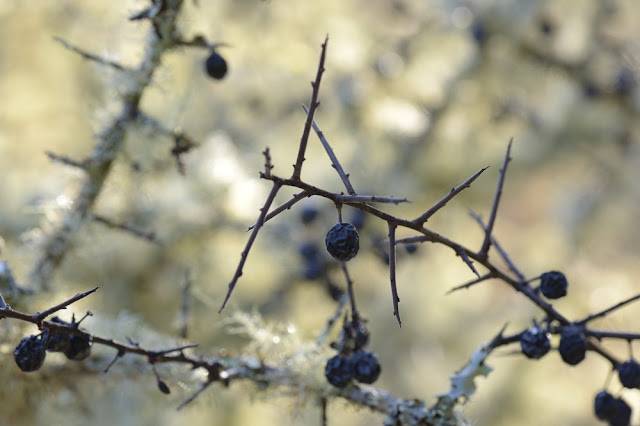 It is very common in Perigord, you can find it at the limits of woods and along abandoned agricultural fields, especially on limestone soil. Blackthorn makes new stalks from its roots, and in a few years its branches can form literally impenetrable hedges. 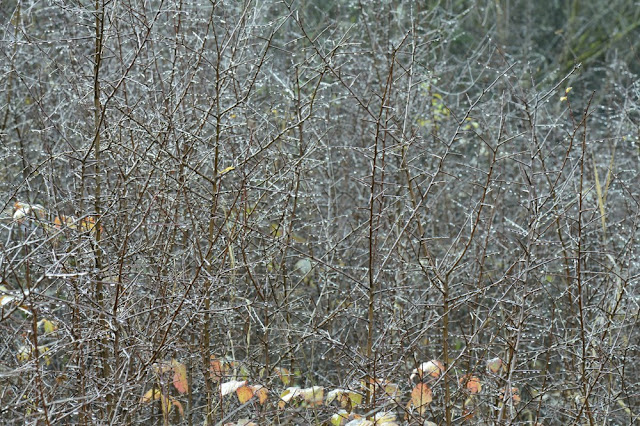 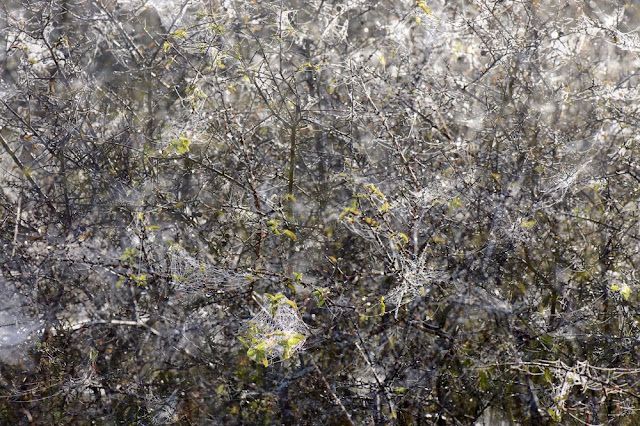 But spiders love it. 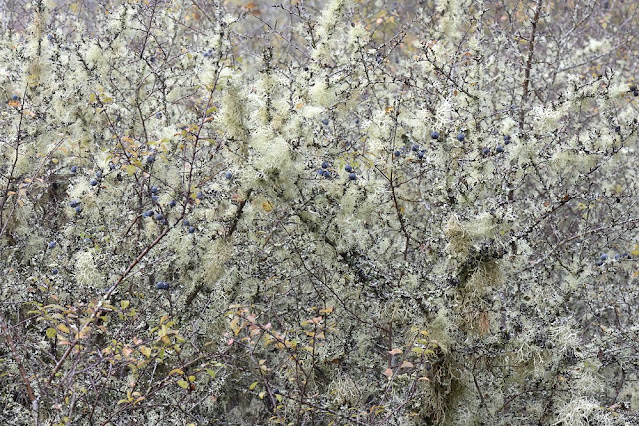 Apparently it is a good home base for lichens.

It is one of the first Prunuses to flower in spring and it does this abundantly. Here below the flowers lost already their petals. 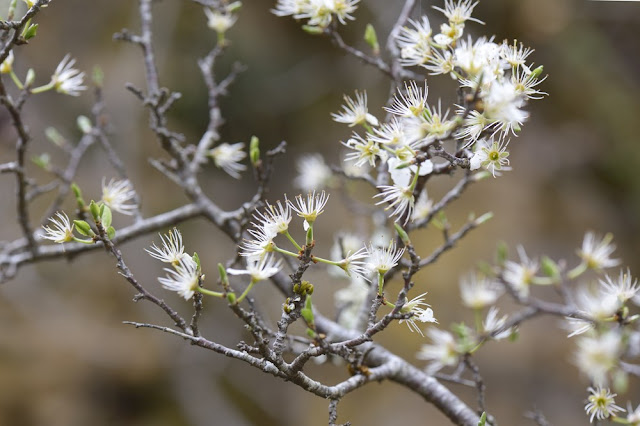 Only the little brushes of the stamens are still there. And now, we have to wait for fruits.

On this field, plants are covered in dewdrops and spider-webs. Some yellow plants are especially ceye-catching. They are Pale Swallow-wort (Vincetoxicum hirundinaria) in autumn attire. 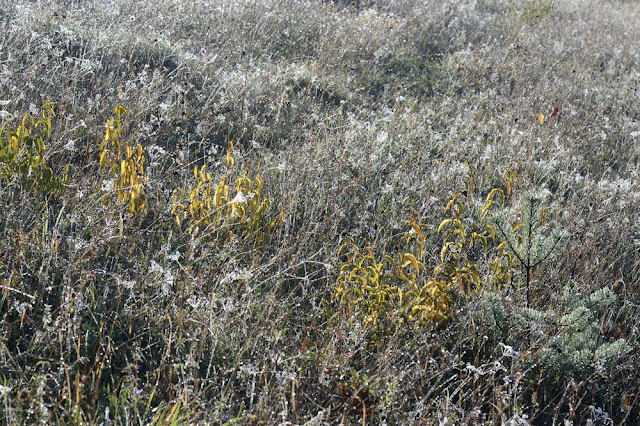 They grow on limestone soil, mainly in meadows or open spaces in Downy Oak woods where the sun can get to them. 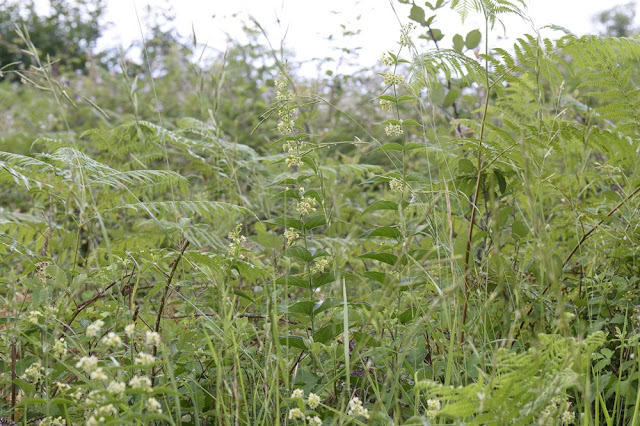 Here a place after logging. Now the trees are gone many plants took advantage of the light and there is no space left. Pale Swallow-wort looks a bit lost in all this green. 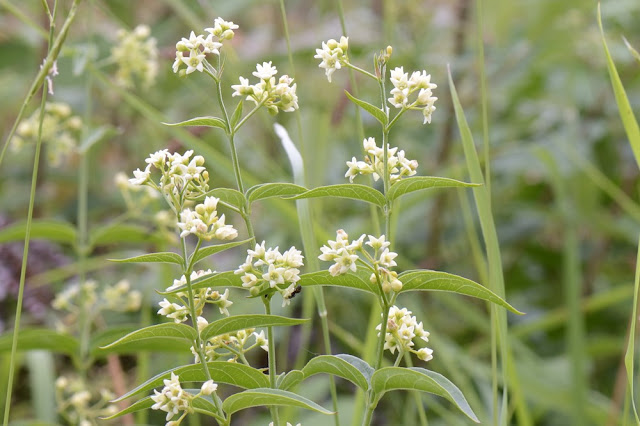 It has many small cream-colored flowers. The petals are thick. The opposite oval-shaped leaves are thin and supple. With some effort you can understand that Pale Swallow-wort is a cousin of Periwinkles, the shape of the flowers and the number of petals, and also the leaves look alike, even if Periwinkle has thin and supple petals and leathery leaves.

Pale Swallowwort has a reputation as an antidote against snake-bites. But, maybe you should avoid this remedy, you risk being empoisoned twice. Notwithstanding 'officinal' in its name, this is a really toxic plant. 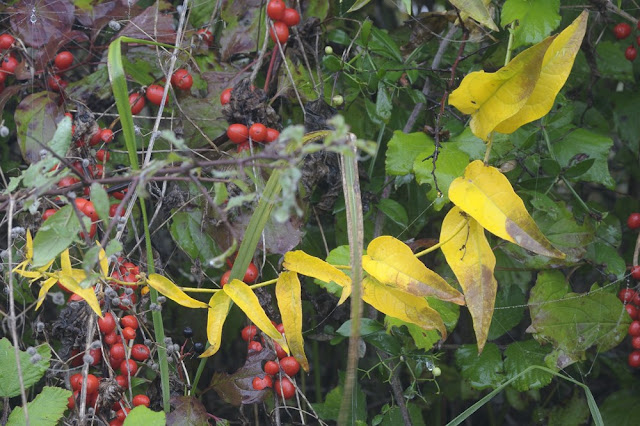 But beautiful with those autumn leaves!

(The red berries that contrast so well with it are from another plant, also poisonous, Black Bryony.)

During a large part of the year you can find Least Pepperwort (Lepidium virginicum) in bloom. It makes a lot of tiny white flowers and if for one reason or another a branch is cut, it just begins anew to make new branches and flowers. 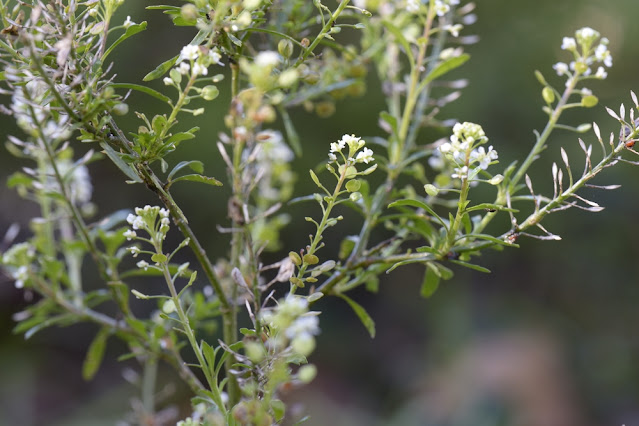 Often you see flowers, fruits and remnants of fruits on the same plant. The fruits are little disks with an incision on top. 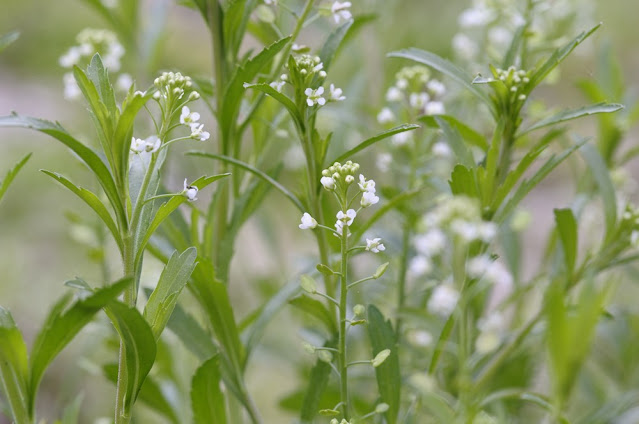 At the first stage of flowering there are still many leaves, rather long and with some dents; with time it looses the larger part of its leaves and concentrates on flowers and fruits. How can it manage with so little chlorophyll-driven production of energy? It does not have a stock in its roots, it is an annual plant without a big root-system. Maybe it does not rely too much on extra energy, it produces as many seeds as long as possible until it is spent. 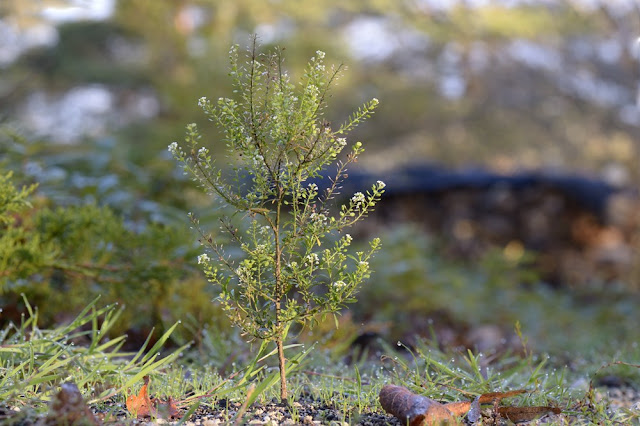 Here a well-developed plant. It has the upright shape typical for Lepidium Pepperworts. You can find Least Pepperwort mainly in antropogenic places, like here on a little-used driveway.

This plant with its small white flowers just begins to bloom after summer and it goes on until October. Common Heliotrope (Heliotropium europaeus) normally grows in cultivated fields after harvest and in habitats that resemble those, like vegetable gardens. 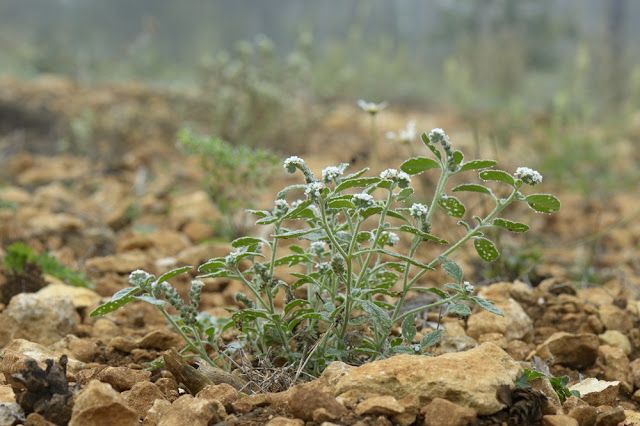 Its flowers are small but there are many of them. At this moment you mostly see the fruits that develop along the stems. 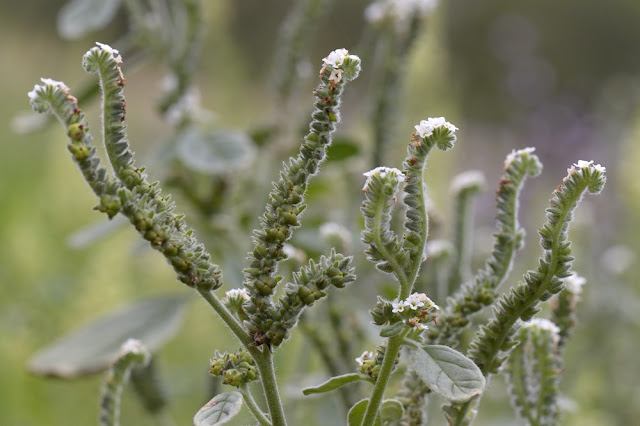 Every stem grows into a scorpioid cyme that unfurls and becomes larger during flowering. This kind of cyme you can also find on other plants of the Boraginaceae family (as Forget-me-nots) 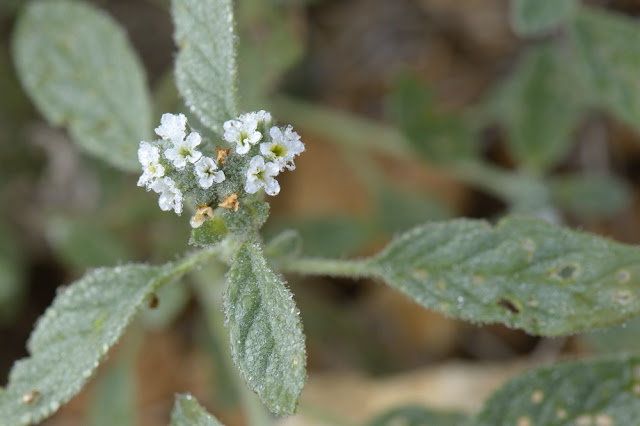 Here the top of a cyme at the beginning of flowering. The leaves are a bit rough, also a distinctive feature of this family. 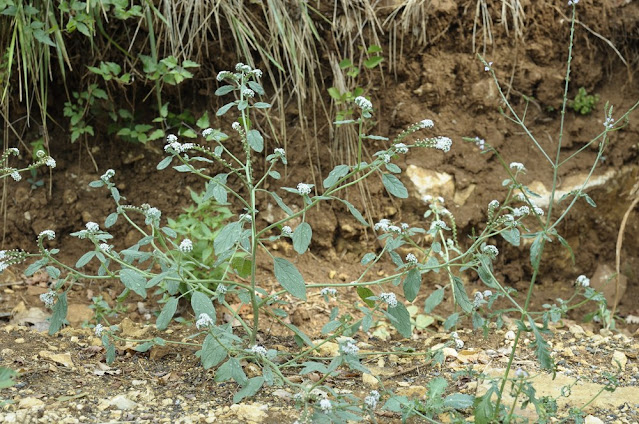 The Covid-19 virus disturbs our daily lives.
It is spring, nature bursts into flowers.
As a small joy (nearly) every day I send by email a wildflower image. If you want to receive it also please contact me.
Please note that all photos and texts on this blog are protected by copyright and cannot be used without prior written permission. If you want to use any of them please contact me.